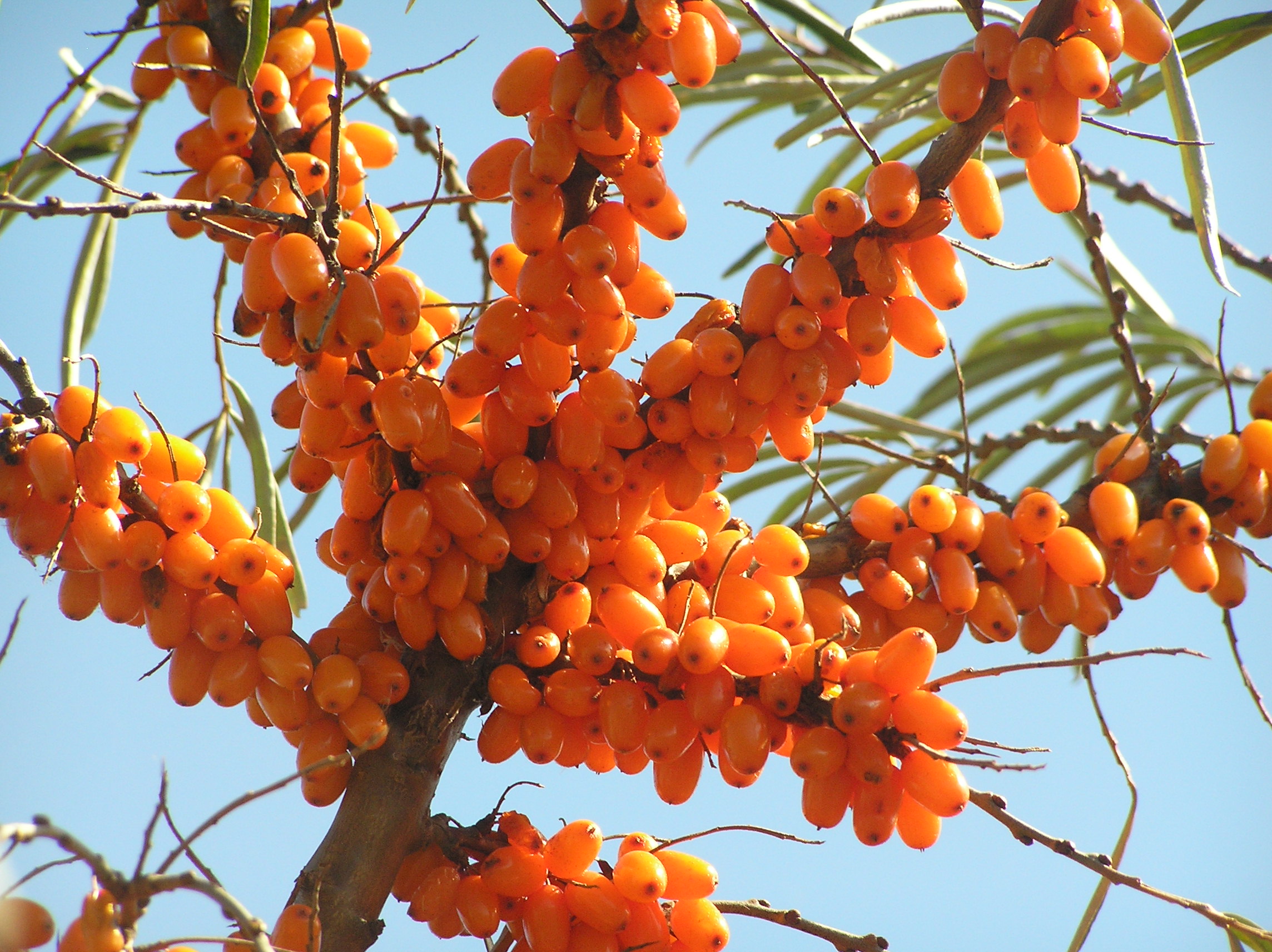 Sea Buckthorn plants are incredibly important natural resources in the mountainous regions of China and Russia, and the Canadian prairies. The plant will grow naturally in both sandy, and clay soils. In fact the plant will thrive in nearly any soil type, but it is extremely intolerant of shady planting sites. The shrubs themselves are also very cold-hardy. The plants can withstand winter temperatures of up to -40 degrees Celsius (-43 degress F). It is also commonly found growing at high altitudes of 4000 to 14000 feet.

It is commonly planted to prevent soil erosion, but also serves as an economic resource for food and medicine products. 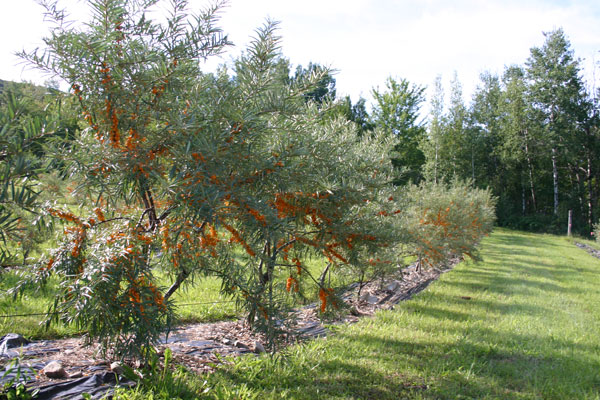 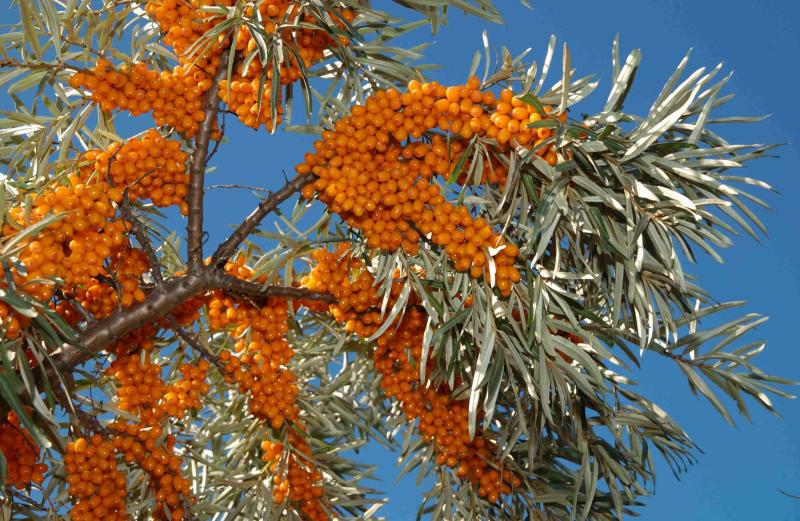 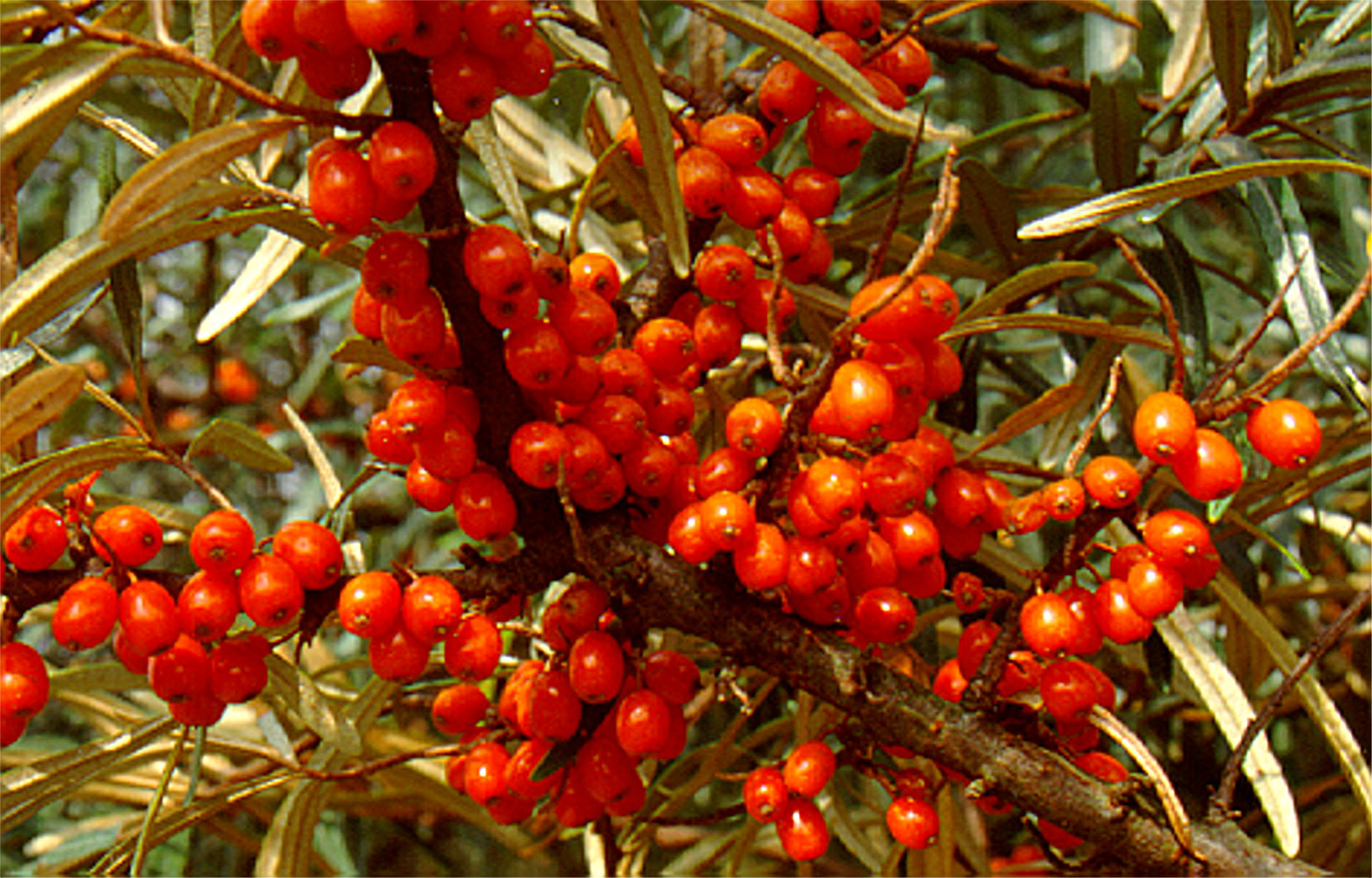 Vitamin C – Sea Buckthorn Contains 10 x Vit C as Found in Oranges  360-2500 mg/100g of berries. Sea Buckthorn oil contains more than 10 times the amount of Vitamin C than is found in oranges. It provides a natural and potent source of anti-oxidants that benefit our skin by protecting the cell walls and DNA structure against the damage caused by dietary and environmental free radicals – pollution and sun damage. Also boosts the production of collagen, improves skin texture & pigment distribution. Acts as an anti inflammatory.

Different parts of sea-buckthorn have been used as traditional therapies for diseases.

Bark and leaves have been used for treating diarrhea and dermatological disorders. Berry oil, taken either orally or applied topically, is believed to be a skin softener.

It has been proved by topical application that it has significant curative effects on skin cancer. It has a good anti-inflammation effect similar to hydrocortisone and does not have any side effects of cortisone drugs.

Sea buckthorn contains vitamins A, B1, B2, B6, C, and other active ingredients. It  have some positive influnce against stomach and intestinal ulcers, and heartburn symptoms.

Hippophae, the sea-buckthorns, are deciduous shrubs in the family Elaeagnaceae.  It is also referred to as sandthorn, sallowthorn, or seaberry.

Common sea-buckthorn has branches that are dense and stiff, and very thorny. The leaves are a distinct pale silvery-green, lanceolate, 3–8 centimetres (1.2–3.1 in) long and less than 7 millimetres (0.28 in) broad. It is dioecious, with separate male and female plants. The male produces brownish flowers which produce wind-distributed pollen. The female plants produce orange berry-like fruit 6–9 millimetres (0.24–0.35 in) in diameter, soft, juicy and rich in oils. The roots distribute rapidly and extensively, providing a non-leguminous nitrogen fixation role in surrounding soils. 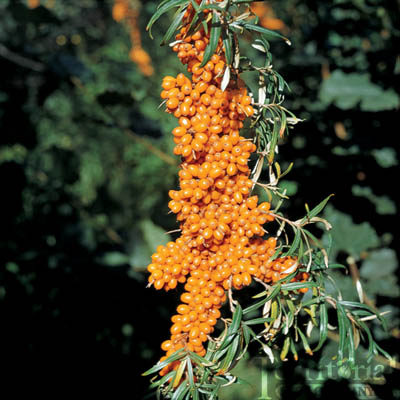 Over the past 20 years, experimental crops have been grown in the United States, one in Nevada and one in Arizona, and in several provinces of Canada

Sea buckthorn is very resistant to frost injury, making it more suitable for planting in a location in your orchard that is not suitable for other crops.  If ample land is available, a north or north east slope is still preferential.  The plant prefers well drained loam soils with high organic matter.  Drainage is important because areas where water pools will drown the roots.  The plants are very salt tolerant and adaptable to a wide range of soil pH.

Prior to actual planting the site should be kept free of weeds for a year to reduce subsequent perennial weed growth. 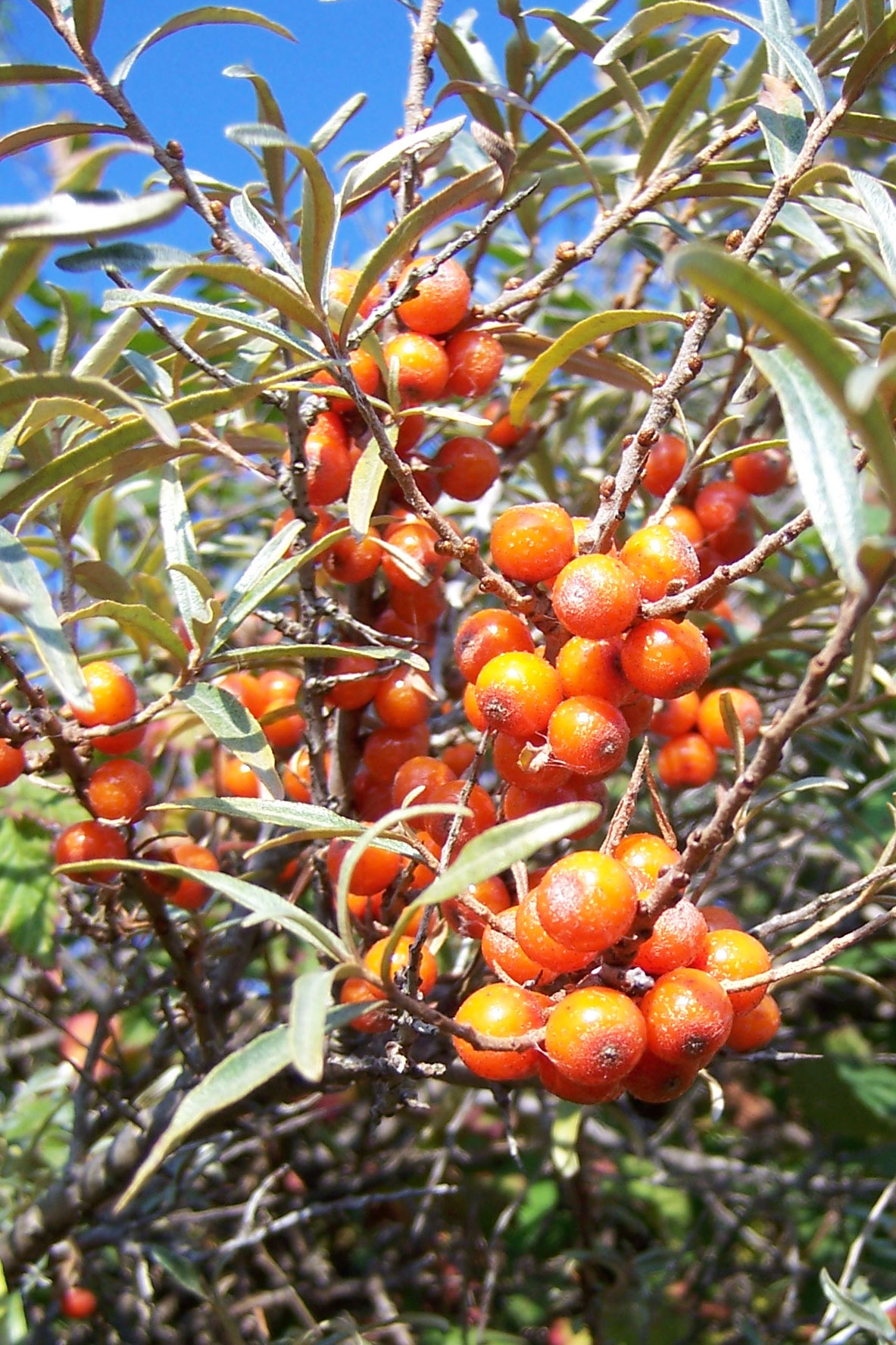 Sea buckthorn is planted much like any other plant, with seeds or cuttings. It’s important to prune and maintain the plant without letting it grow completely wild due to the difficult harvesting process.

If left alone the plant can grow quite large and is full of thorns and delicate berries. It’s best to prune it on a regular basis and train it in a manageable growth pattern for future harvesting.

Fortunately, the plant is very hardy and you need not worry about high heat or blistering colds.

How to prepare the crust and branches of buckthorn

Powder – is obtained from the bark left to dry for two weeks and then ground with an electric coffee grinder . Obtained as a whitish-gray powder with special healing virtues of which is given half a teaspoon four times a day.
Tincture – seven tablespoons of powdered bark is put into a 250 ml bottle Alcohol 70-80 degrees. Let it soak for 15 days, stirring often, then strain . Do this 3 times a day a teaspoon diluted in 100 ml water. Externally, depending on tolerance dilute and apply on wounds that scar .
Decoct – is made from unpeeled branches and leaves any remaining . Two hands of bark of buckthorn , chopped in advance , leave a pint of water over night when filter. Macerate obtained is put aside , and the branches are chopped and cook for twenty minutes over low heat , then filter and let it cool . Finally , combine the two extracts , obtaining about three quarters of a liter of preparation that is consumed throughout the day .
Preparation disinfectant – Boil a handful of sea buckthorn branches , chopped in half a liter of vinegar on low heat for 10 minutes, then let cool and filter. Branches left after filtering burn completely , and the ash is combined with a bit of vinegar obtained previously , so as to form a paste , which is applied on the affected areas .

How do prepare the fruit of sea buckthorn

Fresh juice is made from this fruit soon collected , washed with cold water and then crushed in blender or grinder . Obtain a thick juice , orange in color, which is consumed within 24 hours of preparation . 2-3 spoons to be taken four times a day , usually diluted with apple juice .
The syrup is prepared by mixing half a liter of juice with a half kg of honey. After homogenization , the mixture was kept in a well-stoppered bottle in a refrigerator , where resist a few months. Take each four to six tablespoons per day, lasting cures .

Dried fruit powder is obtained by grinding with electric coffee grinder dried fruit . Administer one teaspoon four times a day as fortified and remineralizing .
Sea buckthorn oil can be extracted only with special equipment .

Administer 30 drops three times a day, in the course of at least three weeks.

Low immunity , susceptibility to infection – there will be a cure seabuckthorn juice , 3 tablespoons of the drink , four times daily , diluted with water or apple juice . This juice has powerful remineralizing effects and vitaminizante , helping the body fight disease . Moreover, sea buckthorn fruit has antibiotic properties , directly combating the bacterial infections .

Acute hepatitis , chronic hepatitis evolutionary cirrhosis in early stages – a great efficiency with the following preparation : a quart of decoction of bark , obtained above recipe , combine half a cup ( 100 ml ) of fresh juice seabuckthorn fruit . Result in a palatable drink very little , but antiviral effects , liver tonic and regenerative extraordinary . Drink two cups (about 400 ml ) of this mixture daily in the course of at least two months.

Adjuvant in influenza, bronchitis , pneumonia – 6 tablespoons taken daily buckthorn syrup on an empty stomach with water . It is a rapid immune stimulant , increases resistance to attacks of fever, promote healing .

Internal bleeding – as first aid until professional medical treatment , given two teaspoons of sea buckthorn bark powder on an empty stomach with water . It has astringent and healing extremely powerful .

Children rickety , dystrophic very susceptible to diseases – are given daily 6 teaspoons of mixture in equal parts of fruit juice with decoction of stems of buckthorn . Despite taste and remineralizing effects vitaminizante inequality. In Romanian folk medicine , it is further recommended weekly bath with decoction made ​​strains of underbrush .

Diseases of the spleen – combine some buckthorn bark tincture three sides by sea buckthorn juice . Obtain a low-alcohol preparation of which take one tablespoon four times a day, in the course of 60 days .

Male and female sterility , premature aging – is a cure with sea buckthorn oil , which is taking 30 drops , twice a day. It is a very strong fortified E ( vitamin youth and fertility ) and boosts hormonal activity , both women and men .

Depression, anxiety – it is a complete treatment seabuckthorn extract , obtained by combining in 2:1 proportion with decoction of the juice of sea buckthorn sea buckthorn . This preparation is rich in serotonin among others – a neurotransmitter that induces a state of calm, courage and optimism.

Diarrhea , dysentery – that emergency remedy , take 1-3 teaspoons of powdered bark of buckthorn . In the long run , good results are obtained by treatment with decoction of bark , from which I drink 3 cups a day. Has strong astringent and antibiotic ( neutralizes bacteria in the gut ) , is useful in the treatment of enteritis , colitis , as well as hemorrhagic cystitis .

Infectious eczema – applied on the affected disinfectant preparation obtained by combining vinegar buckthorn branches with the ash from burning them. Must apply twice daily until complete healing.

For skin protection against UV rays and cold – we recommend combining 50 drops of sea buckthorn oil with a tablespoon of ordinary ointment , cream obtaining an excellent protective virtues . In folk medicine , it is used a crude preparation , but amazingly good effects : three tablespoons of sea buckthorn fine powder , obtained by grinding the dried fruit , followed by a subsequent screening , combined with four tablespoons of butter and mix well until smooth. This grease is kept cool and apply whenever needed .

This entry was posted in Education, News. Bookmark the permalink.