Is Sea Buckthorn Oil the All-Natural Psoriasis Remedy You’ve Been Waiting For? 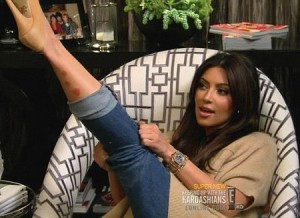 Psoriasis is a non-contagious, lifelong skin disease that affects as many as 7.5 million Americans including Kim Kardashian. Though there are several different types of psoriasis, the most common type is called plaque psoriasis. Plaque psoriasis causes red, raised lesions (patches) that produce dead, flaky skin cells (scales). Psoriasis can affect any part of the body, but the knees, elbows, lower back, and scalp are the most commonly affected.

Sea Buckthorn has been historically used to treat skin disorders in Eastern medicine for centuries, and is now being touted as a natural remedy in an effort to treat periodic psoriasis flare-ups. Seabuckthorn oil may alleviate symptoms of eczema and psoriasis, and promote tissue regeneration. According to the Rosacea Support Group, Sea Buckthorn oil contains palmitoleic acid (Omega-7), a component of skin. In addition, Sea Buckthorn oil has antibacterial, anti-inflammatory and regeneration-promoting properties, and contains essential fatty acids and tocopherols, vital for maintaining healthy skin.  Learn about sea buckthorn for skin care. 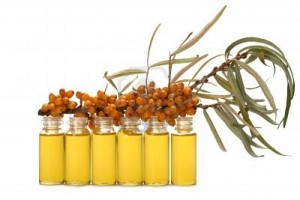 An ingredient of the oil, palmitoleic acid (Omega-7), is already considered a valuable topical agent in treating burns and healing wounds. Various researches suggests that this essential fatty acid can also nourish the skin when taken orally when adequate quantities of sea buckthorn or its oil are consumed; and that this is a useful method for treating systemic skin diseases, such as psoriasis  and atopic dermatitis.  Read about sea buckthorn’s omega 7 content. 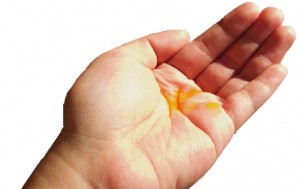 According to many, common triggers of psoriasis outbreak are dry skin, stress, infections and various medications.  Clinical experiments in the Shantow Tropical Disease Hospital and the Shanxi Pharmaceutical Research Institute indicate Sea Buckthorn oil, possibly because of the effects of its high levels of Vitamins A and E, essential fatty Acids and flavonoids:

Unlike rosacea, which is generally harmless, psoriasis is generally caused by immune deficiencies and has been linked to more serious problems such as heart disease and arthritis. A variety of topical treatments may help improve symptoms of psoriasis, including steroid preparations, but as we all know, most chemical based medications can trigger unwanted side effects such as, nervous system problems, heart failure, and or, liver problems. Sea Buckthorn oil is already widely used alone or in various preparations topically applied for burns, scalds, ulcerations and infections. It is an ingredient in sun block.  Sea Buckthorn oil has UV-blocking activity as well as emollient properties and it is an aid in promoting regeneration of tissues. Though there is no way to get rid of psoriasis, you can try to help avoid annoying and painful outbreaks, help your body recover more quickly and ease your symptoms with Sea Buckthorn oil. Learn more about sea buckthorn and rosacea relief.

16 Responses to Is Sea Buckthorn Oil the All-Natural Psoriasis Remedy You’ve Been Waiting For?