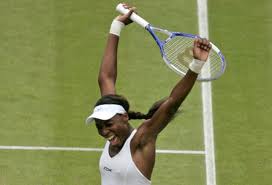 In a surprising 2011 Good Morning America interview, tennis star Venus Williams announced that she was quitting the US Open after being diagnosed with an autoimmune disease called Sjogren’s Syndrome:  a chronic condition in which an individual’s disease-fighting cells attacks the moisture-producing glands in the body. Williams said she suffered from symptoms of fatigue, dry eyes and mouth, and severe joint pain and confessed that she was disappointed she had to pull out of the tournament, but added she was “now focused on getting better and returning to the court soon.”

Dry mouth, dry eyes, dry and inflammatory vagina and fatigue are often typical symptoms of Sjogren’s Syndrome. As of yet, there is no cure, but proper treatment may help relieve symptoms so you can live a comfortable and productive life. Dietary management providing nutritional supports are initiative measures to maintain the health of mucous membranes.

Sea buckthorn has been used in Eastern medicine since ancient times

to treat problems throughout the mucous membrane such as infections in the respiratory system and gynecological ailments. And as dietary supplements go, reportedly Dr. Oz has recently suggested using 2,000 mg a day of Sea Buckthorn oil, claiming the special essential fatty acid called omega-7 (along with other helpful oils) contained in this special oil from the berries of a cold weather shrub is very helpful at improving lubrication throughout the body – including tears, saliva, bowel protection and vaginal dryness.

In clinical study on Sjogren’s and Sea Buckthorn, twenty-three female patients with typical symptoms of dryness, pain and itching in the genital tract mucosa took Sea Buckthorn oil for three months. Conditions of the genital mucosa were evaluated using a visual analogue scale method before and after each treatment period. It was found that the use of Sea Buckthorn oil resulted in a higher rate of improvement in all symptoms of the twenty-three patients. In another study, researchers recruited 100 adults with symptoms of dry eye syndrome. For three months, participants took two grams of sea buckthorn oil or a placebo each day. By the study’s end, those who’d taken sea buckthorn oil showed a reduction in several dry eye symptoms (including redness and burning). These results suggest that Sea Buckthorn Oil may present a promising alternative for improving the condition of the mucosa of Sjogren’s Syndrome patients.  Read more about sea buckthorn and dry eye symptoms.

We don’t exactly know the details of Venus’ Sjogren’s treatment, but she mentioned that a major problem of her disease is due to excessive inflammation. Inflammatory conditions associated with Sjogren’s Syndrome include those of the lining of the breathing passages causing lung and vaginal infections, and pain the joints. She may need to address this symptom fast in order to go back to the tennis court as soon as possible. There is still much to learn, but here are some of the ways in which Sea Buckthorn works to reduce inflammation and supports the body’s natural healing ability. Taken internally or applied topically Sea Buckthorn seed and fruit oils deliver a powerful anti-inflammatory punch. Fifteen phytosterols, seventeen carotenoids, all the isomers of Vitamin E and the essential omega 3, omega 6 and omega 7 have each been identified as effective anti-inflammatories and between them, Sea Buckthorn seed and fruit oils contain them all! Applied topically, the oils not only reduce inflammation, but also regenerate cells, ease discomfort, nourish and soften dry and over-reactive skin and provide a protective barrier against water loss and infection.  Further information on sea buckthorn and inflammation relief.

Just recently, Williams won the first women’s singles match of the 2012 Sony Ericsson Open after being diagnosed with Sjogren’s Syndrome. Obviously, she was able to get her Sjogren’s symptoms under control. Whether she treated her Sjogrens’ with Sea Buckthorn oil, or not, the fact remains that it is another great option to try to help manage this debilitating disease.