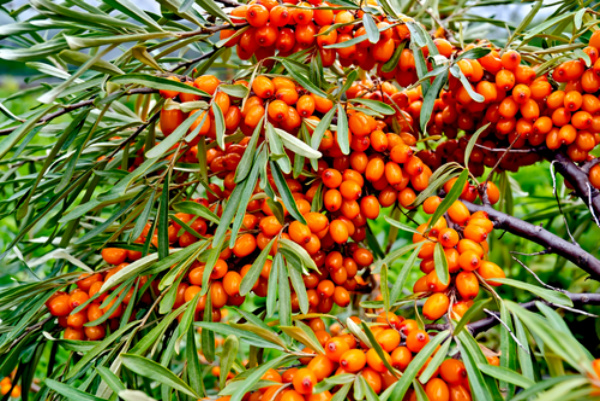 While not well-researched, sea buckthorn may be a valuable medicinal plant. (Shutterstock)

Sea buckthorn is not a common household name, but this plant is a favorite of individuals who like to stick to natural remedies. Known by the Latin name of Hippophae rhamnoides , sea buckthorn is typically used in powdered form or as an oil derived from the berries; however, according to Examine, all parts of the plant appear to be bioactive, meaning they have an effect on living tissue.

Sea buckthorn has not been the focus of any rigorous scientific study; however, experts do know the plant is a significant source of flavonoids, polyphenolic compounds unique to plants that are often responsible for the positive health effects seen when included in a balanced diet.

In addition to being a rich source of flavonoids, mostly those structurally related to Quercetin and Kaempferol, sea buckthorn also contains chains of catechin molecules, or those molecules responsible for the benefits of green tea. Though no large-scale studies have been done on the health benefits of sea buckthorn, it is considered an appropriate choice for use where any flavonoid-containing product might be considered.

“After millennia of quiet use, the many sea buckthorn oil benefits have finally leaked out to the mainstream health industry, said Josh Wong, a sea buckthorn enthusiast, who runs SeaBuckthornOil, in a press release. “Some of the benefits of sea buckthorn oil are only just being discovered – Russian astronauts use it for UV protection, while women who are concerned about their appearance buy products with it included as an anti-aging ingredient. Individuals may be using it to help heal stretch marks or burns, or to help relieve skin conditions like acne.”

What is sea buckthorn used for?

Traditionally, WebMD indicates sea buckthorn has been used for:

This medicinal plant historically has been used for cardiovascular and blood health, and limited research supports its potential to protect the heart in rat trials.  Like other high-flavonoid plants, sea buckthorn has also been seen as beneficial for accelerated wound healing, neuroportective properties and improved skin quality following consumption.

“Hippophae rhamnoides is effective at helping with many common health goals that other flavonoids are effective at, and while it seems to have a large base in traditional medicine no highly unique properties or molecules have been detected with this plant yet,” states Examine. “Currently, sea buckthorn can be said to be healthy but there is no one reason to supplement with this plant over others that are more effective.”

Sea buckthorn should not be used in combination with other medications that inhibit clotting, including but not limited to: aspirin, clopidogrel (Plavix), diclofenac (Voltaren, Cataflam, others), ibuprofen (Advil, Motrin, others), naproxen (Anaprox, Naprosyn, others), dalteparin (Fragmin), enoxaparin (Lovenox), heparin, and warfarin (Coumadin).

Discuss this and all other supplements with your doctor before adding it to a regular routine.

This entry was posted in Health Benefits, News. Bookmark the permalink.