Mapping out the Riches of Nature – Sea Buckthorn On the Charts! 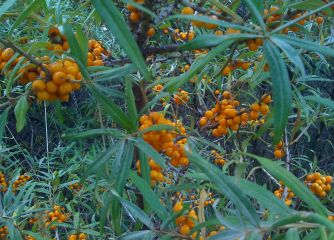 Following the 2006 ban on sturgeon fishing, the Romanian town of Sfantu Gheorghe, located at the mouth of the Danube river, turned to other income source to replace its fishing based economy. Thus, local children undertook to map out a plant called sea buckthorn, as a first step in forecasting its potential harvest value. Sea buckthorn is a coastal bush which produces yellow berries, typically used in food, beverages and traditional medicine. To achieve their goal, the children used mapping and GPS facilities made available from a crowdsourcing-based biodiversity monitoring initiative called Naturalliance.

Similarly, many organisations are mapping species across Europe with the help of volunteers. Naturalliance has previously been supported by the EU funded TESS project, and continues to operate since the project ended in 2011. “TESS [assisted] the integration of biodiversity information from the local level into planning and land-use decisions,” Stratos Arampatzis tells youris.com, whereas Naturalliance “is used as to raise awareness, at government level, of the need to talk with local people about the benefits of maintaining and restoring wild resources.” Arampatzis is a Manager at a consultancy called Tero, in Thessaloniki, Greece, which is one of the project partners. Together with its follow-on initiative Naturalliance, the TESS project could become a test case for citizen democracy. “If [such initiatives] help to show the way to bottom-up democracy, starting with the environment, the implications could be large”, says Robert Kenward, who runs environment software company Anatrack, Wareham, UK, a TESS project partner. His company has developed mapper for habitats, plants and animals based on photographs.

For such biodiversity monitoring initiatives to be successful, be it for planning, land use decision or ecosystem preservation purposes, however, the key is raising awareness of the need for it among people. “In order to monitor nature, volunteers must be involved. So, the awareness of the public has to be raised and there is a lot to be done in that issue,” comments Dimitris Anagnostopoulos a science writer and agronomy PhD researcher specialised in agricultural engineering and natural resource management, at Thessaly University, Volos, Greece. “The state’s efforts have to be intensified, especially through education, seminars and workshops. This is how we are going to make people participate,” he adds.

Gathering wider support among people can be tricky, however. “We are still seeking the best way to engage communities without embracing large organisations in government and commerce that might swallow us”, remarks Kenward.

Convincing people of the importance of their role in biodiversity monitoring may require revisiting its image. Indeed, experts such as Toby Gardner, conservation science researcher at the Department of Zoology, University of Cambridge, UK, believes that biodiversity monitoring and management should be viewed as inherently social processes that are guided by science, but not strictly as scientific activities. Gardner concludes: “without clear recognition of the broader societal context for the monitoring process, and of the conservation values that underlie the monitoring, even the most technically robust monitoring programme will fail.” Read more at: http://phys.org/news/2013-01-naturalliance-crowdsourcing-solutions-riches-nature.html#jCp