The Benefits of Sea Buckthorn: Five Reasons to Take It

The Benefits of Sea Buckthorn

Five Reasons to Take It 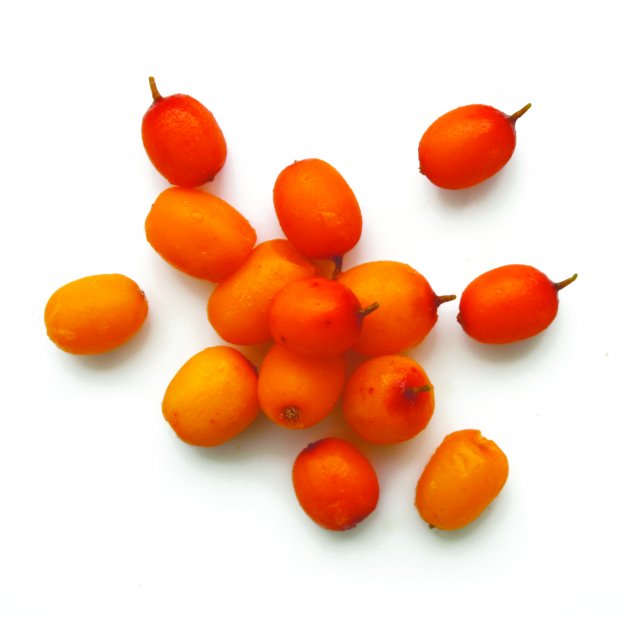 Q: I am wondering about the therapeutic benefits of sea buckthorn oil.
Kelly, Markham

A: While relatively new to the North American market, sea buckthorn (Hippophae rhamnoides) has been used throughout history in various parts of the world to treat a variety of different conditions.  The first written documentation dates back to 1300 years ago with references to its ability to affect overall health, healing and beauty and to restore, revitalize and rejuvenate the body both inside and out.  Because Sea Buckthorn grows in harsh weather conditions and in high altitudes, it fortifies itself against the elements by producing a powerful array of nutrients that are beneficial to human health.  To date, we have discovered that it is high in Vitamin C, Vitamin E (tocopherols and tocotrienols), carotenoids, flavonoids, phenols, sterols and proanthocyanidins.  Additionally, it is an excellent source of the Omega 3, 6, and 9 fatty acids, as well as Omega 7.  These fatty acids make up the structural components of our cell membranes and maintain skin health, regulate inflammation and help to maintain a healthy cardiovascular and nervous system.

While both the seed and the berry oil are used therapeutically, the monounsaturated Omega 7 fatty acids are more concentrated in the berry oil. Also known as palmitoleic acid, Omega 7 can be found in other sources such as macadamia nuts and cold water fish in much smaller amounts. Omega 7 has numerous skin and health benefits, and it has also been shown to support cardiovascular and gastrointestinal health.

Many of the beneficial effects of sea buckthorn are due to its ability to maintain healthy cell membranes. Our cell membranes cover our digestive tracts, upper respiratory tracts, as well as the urogenital tract and the eyes.  When essential fatty acids are low in the diet, this leads to an abnormal composition of the skin and mucous membranes, making them more permeable to pathogens, toxins, allergens, and encouraging an increase in water loss.

Skin Health: Omega 7 is vital to the production of collagen to ensure healthy skin, hair and nails.  In addition to boosting collagen production and reducing wrinkles, it protects cell membranes from oxidative damage from the sun, toxins and environmental stress and improves skin dryness and loss of elasticity. Studies have found sea buckthorn to improve skin hydration, elasticity, colour and roughness.  One study found a 33% improvement in skin hydration, elasticity, roughness and a reduction in deep wrinkles after one month of both internal and topical use. Sea buckthorn can also be used therapeutically for conditions such as eczema, psoriasis, rosacea, acne and various types of dermatitis.

Eye health:  Dry eye commonly affects otherwise healthy individuals and can be a result of aging, prolonged computer use or contact lens use, certain medications or various illnesses. Symptoms typically include soreness, redness, burning and blurry vision.  In several studies, sea buckthorn was demonstrated to improve dry eye and associated redness and burning by its ability to reduce inflammation and oxidative damage, thereby improving the concentration of the tear film. Because of its ability to assist with dry eye, sea buckthorn has been studied for its benefits in treating Sjogren’s syndrome, an autoimmune disease characterized by chronic inflammation and damage to the body’s fluid-secreting glands, resulting in dry eyes and dry mouth.  The study found sea buckthorn improves the overall symptoms associated with this disorder when compared to a placebo.  Sea buckthorn may also have benefits in relieving dry mouth associated with other conditions or the use of various medications.
Gastrointestinal Health: Because Omega 7 has a soothing effect on the body’s internal linings, it is useful to hydrate internal organs and reduce inflammation of the irritated membranes.  Sea buckthorn has been used beneficially to treat an array of gastrointestinal concerns such as gastritis, colitis, ulcers, diverticulitis, and pain from excess stomach acid or chronic inflammation.
Weight Management: It is has been proposed that when taken internally, omega 7 fatty acids signal the body to stop storing fat.  In clinical studies, it has been demonstrated that users are able to lose fat and also to keep it off for longer periods of time.  One of the proposed mechanisms of action is that omega 7 fatty acids help the body become more sensitive to the effects of insulin, a hormone that helps the body convert glucose into energy.  When insulin levels are healthy, less fat is stored and as a result it is possible that sea buckthorn may also have a therapeutic role to play in the prevention and treatment of fatty liver disease, diabetes and metabolic syndrome.
Cardiovascular Health: The entire cardiovascular system can benefit from using sea buckthorn.  It improves lipid panels in the blood by reducing LDL (bad cholesterol), IDL (intermediate cholesterol) and increasing the amount of HDL (good cholesterol) circulating in the blood.  Palmitoleic acid has been shown to reduce elevated C-reactive protein (CRP), a marker for inflammation.  By reducing inflammation and smoothing the walls of the vessels, omega 7 fatty acids keep cholesterol levels lower and reduce their ability to stick to the blood vessels, where they can cause problems such as atherosclerosis or hardening.
Respiratory Health: Due to its ability to soothe irritated membranes and reduce inflammation, sea buckthorn can be used to help with dry irritated coughs, bronchitis, and help to reduce the bronchial inflammation associated with asthma.

Dr. Suzanna Ivanovics, ND operates a naturopathic practice in downtown Toronto and is a consultant at The Big Carrot.

2 Responses to The Benefits of Sea Buckthorn: Five Reasons to Take It